Your Tendency to Be Self-Critical Is Actually Evolution at Work 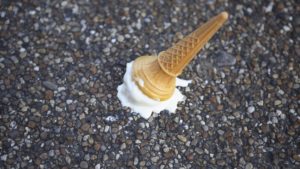 Dwelling on dumb mistakes is part of what’s kept us alive.

At any given moment, research shows about half of us are kicking back to a film called The Thoughts in Our Head. Mental time travel is normal. When we’re not zeroing in on a task, we’re thinking about the past or future, and more often than not about what we want to eat later.

But once in a while, usually when we’re alone or have free time, we flash back to familiar, shitty short films from our past: the unintentionally creepy thing you said to the cute bartender last weekend; a friend’s secret you blew in front of a group; the condescending email from your boss after a slip-up—two years ago.

Ruminating, or dwelling on something we’re angry, bummed, or embarrassed about, is part of what makes us human—and it’s not an entirely bad thing. “It’s arguably one of the greatest improvements of the human brain in the last two to three million years—our nearest cousins, chimps and bonobos, don’t do it,” says psychologist Rick Hanson, senior fellow at the Greater Good Science Center at UC Berkeley and author of Hardwiring Happiness.

Our propensity to focus in on the negative (scientists call it a ‘negativity bias’) protects us from making the same mistakes again in the future. As hunter-gatherers, it kept us alive. (Note to self: Don’t feed the lion.) But there’s a modern day kink: The brain has a hard time distinguishing between physical harm (a rarity for us nowadays—we’re running from lions less) and social harm. So while we believe we’re solving a problem by dwelling on little social slips, we’re often just spinning our wheels and making them worse.

Slipping into that stewing mode comes easier for some: Women are more likely than men to ruminate, and people with anxiety and depression are more likely to brood on bad stuff that’s happened, says clinical psychologist Erin Olivo, author of Wise Mind Living. Crummy experiences from your past can set you up to dwell on the negative, too: If an ex used to berate you for minor fails, you’re more likely to chew on future ones, Hanson says.

But most big-time ruminators can simply blame their genetic makeup and temperament—they’re biologically hardwired to react more intensely or negatively when embarrassing, annoying, or hurtful events happen. And once that worry muscle in the brain has been built up, it’s hard not to keep using it.

Hard, however, doesn’t mean impossible. Dwelling on small stuff—like social faux pas—wears down the body over time. “We often have the same physiologic stress response to threats we’re imagining and threats happening in real time,” Olivo says. So for your sanity and health, it’s worth it to stop the cycle. Hanson says practicing mindfulness—even five minutes a day—can make you less susceptible to those mini-movies in your brain.

And while it’s tough to stop thoughts in the moment, diverting or distracting yourself once you realize you’re ruminating is an effective way to change course: Go have a snack, buckle down on work, call a friend, or take a couple deep, calming breaths.

Ultimately, the best way to put a fork in flashbacks about stupid mistakes is to grit your teeth and accept what happened. “Acknowledge the reality, ask yourself what you can learn from it, and then leave it in the rear-view mirror,” Olivo says. Back to what’s for lunch.

Read the article on Tonic here.